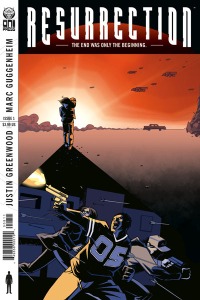 Resurrection was nowhere near my top 10 of the year until last month. When the reboot (and god only knows why it was ‘rebooted’, the previous volume seemed perfectly able to continue) of this title launched in the summer, it started off well, but quickly lost my interest. There were some redeeming factors – the addition of the ‘Burns’ (humans who were experimented on by the Aliens aka the ‘Bugs’) and the ‘Road Agents’ (human brigands basically, who seem to like attacking with bows and arrows). Most tellingly, this second volume began with Bill Clinton, back during his Presidency, announcing via an emergency broadcast that the Earth was being invaded. This initial scene packed a real punch, giving the story a footing in reality and quickly engaging the reader. For most of the rest of the issue, it was pretty much ‘so what?’. Issues 2 & 3 were pretty lame, so bad that I couldn’t even be bothered to review them, barely touched when I received them through the post. One sticking factor was the art of Justin Greenwood, which seemed overly stylised (I described it at one point as being ‘filtered through that old Dreamcast game ‘Jet Set Radio’. I could make no connection with it as a way of telling this story of survival on a devastated Earth. 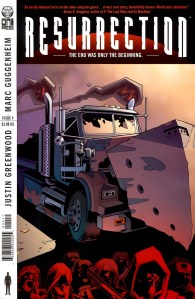 However (and I better get onto the good stuff before I give the impression that this title is utterly without merit) things improved drastically. There was a glimmer of hope at the end of issue 3, where a Father has to make a terrible choice. This was a short story, seperate from the main story, but hinted that there was some hope that Resurrection Volume 2 was not going to be an unmitigated disaster. Issue 4 continued the recovery, with a gripping ‘Road Agent’ attack on a human ‘sanctuary’ called Red Lion (which sounds like a typical British boozer, which itself can be seen as a sanctuary).

Then issue 5 came along, and Resurrection completely (*ahem*) ‘resurrected’ itself. The fact that Bill Clinton, who really saved the first issue, was back again, in a central role was a key factor. You may not think that having an ex-President of the United States as a central character in comic book is a good idea. I beg to differ. Clinton has enough real-life charisma that his inclusion is a bonus to the comic, and the fact he is in it places all the characters in an era-defining event. This is the World trying to get back on its feet. A few key survivors are in one place, with one intention – to stay alive and try and bring order to the chaos that the Alien invaders left behind. The other characters are now being fleshed out, and some tough choices, all concerned with survival (both the individual and collective) are having to be made. Tensions are running high, and the threat of the Road Agents is ever present.

This title is now something I look forward to. It took a while to get going, but Resurrection Volume 2 is telling a gripping story (and the art has grown on me) that promises much in the near future. 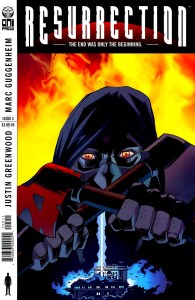