Italia 90 – a great World Cup if you were English (well, up til the end of the Semi Final). Probably released to cash in on the Greatest Football Tournament on Earth, ‘Football Champ’ was Taito’s quirky and immensely playable Football arcade game. The Greatest Football Arcade Game on Earth. according to me.

This was another Summer ’90 / ’91 Drayton Manor Arcade experience, and this one was jostling with Operation Wolf & Final Fight for my meagre earnings (believe it or not, but students working part time seasonal jobs at Theme Parks are not paid huge amounts of money. FACT.)

There was a luxury version of this game, with a little bench, and a huge (well, 40 inches or so) screen positioned roughly 2 or 3 metres away from you. If memory serves correct. And it doesn’t always.

The football was based around an International Competition (ie The World Cup in all but name). You could play as most of the major teams (including England), and matches lasted around 2 minutes. Control was fairly   basic – it was short pass / long pass / shoot at goal. But there was the added joy of violence when you were not on the ball. Yes, you could pile in with a vicious slide tackle, you could attempt a Harald Schumacher type foul where you lead with your knee, or you could just punch the opposition in the face;

if you got caught by the referee, you could get a yellow or red. The idea was to floor him from behind first, then go on your merry way, crippling the opponents. It just wasn’t sporting. But it was funny.

The action was fast, frenetic, and there were sweet spots on the pitch that, if you timed it right, you could lob the ball over the goalie as he grasps at thin air. Getting the time and space to perform this move was not always possible though, as opponents always seemed to be harrying and hassling, which made the goals,when they did go in, even sweeter.

Playing it laughs, Taito appear to have gone for comedy and caricature for their characters in the game. Check out those curtains (ie the haircut) on the Dutch Manager (he looks a bit like Steve Buscemi);

It was a wonderful, fun game. Loads of re-playability. And the reward for winning the Tournament was the magnificent “All your base are belong to us’ lite;

and you can play it on MAME. You should try it.

If you want the definitive account of Football Champ, then I would like to direct you to this fantastic piece;
http://retrovania-vgjunk.blogspot.co.uk/2012/06/football-champ-arcade.html
there is a little bit about ‘Super Shots’, something I never heard of before. They even have some footage on youtube of someone doing these hallowed moves, for goodness sake.

‘You Are Hero’ and various other screenshots are courtesy of
http://vgjunk.tumblr.com/post/25866957714/its-always-nice-to-get-some-recognition-from
and
http://retrovania-vgjunk.blogspot.co.uk/2012/06/football-champ-arcade.html

The Football Champ flyer is courtesy of;
http://flyers.arcade-museum.com/?page=flyer&db=videodb&id=2365&image=2

(Star Wars Sit-Down Arcade Cabinet, 1983)
After all these years and all the various iterations of the franchise across many platforms, it is this game, from Atari, first released in1983, that remains the best Star Wars game on any system / platform. When you saw it sitting in an arcade, it drew you towards it like no other cabinet. It was quite normal to have a crowd around it, and a queue to play it. One of the all time great Film – Arcade conversions, and one that took many of my 50p coins in the mid eighties.

Why? Simple. It is an incredibly immersive experience, especially when you are sitting in the arcade cabinet / cockpit. This, combined with the sounds of Star Wars (the chirping of R2-D2, the calming voice of Obi Wan, the roar of Chewbacca,  the whizzing TIE fighters, the MUSIC!!!). It takes its cues from the original film. It is inspired by one of the most exciting flying/dogfight sequences in Cinema history and puts you in the cockpit of an X-wing fighter attacking the Death Star. The game is in three stages: First you have to shoot the Tie-fighters before they shoot you. Then you fly down to the surface of the Death Star and shoot the towers.At the climax of the game, you get to fly down the trench and shoot the photon torpedoes into the  Death Star’s exhaust port (its Achilles Heal) to finish. Once you achieve that, there is a wonderful end screen that shows your handiwork, as the Death Star explodes. Victory to the rebellion!
Then you get to go back to the start and do it again only this time it gets harder.

This game is considered the #4 most popular game of all time according to Killer List of Video Games. (Wikipedia)

The film Jaws has a nice little sequence where we see someone playing the arcade game Killer Shark – its one of the early arcade games (produced by Sega) and (obviously-duh) pre-dates the film. For a great clip of this scene, click here

Anyway, great game and all that – I remember playing it at the Drayton Manor Park arcade in the mid 1970s – probably my first arcade experience. I recall that the gun trigger was hard and there was a sort of snapping when you fired off a shot. The wriggling of the shark (and the stream of blood) when you hit it was disturbing and exhilarating – a game where you see your victim in its death throes! There is plenty written about this game – see the links at the end of this post.

There were a few other games out once the film Jaws was released, obviously capitalising on the Shark craze;

Claimed to be the first video game adaptation (for that article by Ian Bogost here), this was early Atari, capitalising on the success of Jaws, but when Universal nixed their license to make a game of the film, they went ahead and made a game anyway. They even created a dummy company called ‘Horror Games’ just so the Atari brand wouldn’t be associated with any quick n’ dirty cash-in. Best of all was the marquee that sat at the top of the arcade cabinet, with the game advertised as Shark (small letters) JAWS (big letters);

Some guy writing at Everything2.com claims there are only 3 of these complete arcade cabinets left in existence, and only one of them works. Not that it would be worth tracking down, as the game is of its time – simplistic, repetitive, monochrome and graphically basic (the screenshot of the game tells you all you need to know). 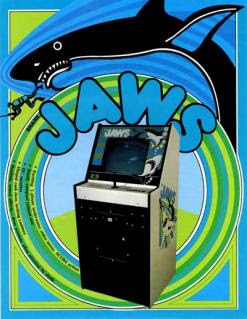 The magnificently titled Project Support Engineering (that’s not a company, it’s a department!) produced this wonderful cabinet, and even produced a game to go inside it (though the game is irrelevant in comparison to the grandeur of this);

The game looked like Shark Jaws and Shark (ie BASIC) and the premise and objective were to control a diver who was collecting gold from the sea baed, and get him back to his boat and avoid the sharks (who were maneaters, of course). Here is a screenshot of the game that I found on KLOV;

Turning the whole shark craze on its head, this Arcade effort puts you in as the shark, trying to avoid nets and traps as you attempt to get to the swimmer before they reach the shore(!). It’s another one that isn’t available on emulation (like Shark Jaws), and again it is simplistic gameplay with basic graphics (see below) and probably wouldn’t keep the average gamers attention for more than a minute today.

Like the forerunner of these games, Killer Shark, Blue Shark had a gun mounted arcade cabinet and it was another plain and simple shooting game. Get the shark with your gun, but don’t hit the humans who are diving around them. You also get to kill numerous other aquatic life (octopus etc) for no particular reason, which is all well and good when you are hang around arcades as a kid in the Seventies, but you probably couldn’t get away with it now, as it would, I expect, be classed as a game that encourages the destruction of the Environment and sentient beings. Nowadays you get games where you get to kill real looking people or ‘real’ looking zombies or the perennial aliens instead. The game is fairly basic (but less so than the others discussed so far), but with more graphical subtlety and involved gameplay.

There was also Shark Attack, released in 1981 by GPi (Game Plan inc), that had you playing the shark (just like the earlier game by US Billiards, Shark) and you had to eat the arcade sharks favourite snack – the diver. This time though, the diver can strike back as some of them have harpoon guns! Also, this game was in colour! However, on my emulation of Shark Attack, it is dated as 1980, and made by Pacific Novelty. Game Plan must have distributed it. Here is a screenshot of it;

http://bavatuesdays.com/killer-shark-1972/ – the best blog I have come across in a while. Nice entry on Killer Shark.

http://www.daemonkeep.com/killershark.html – At DaemonKeep games, they have a repro of the game for download;

http://marvin3m.com/arcade/shark.htm – Cabinet shots, flyer info, a look at the innards of the cabinet…

http://www.pingeek.com/killer/killer.htm – If you want the schematics of Killer Shark, this is the place for you.

KLOV has a basic entry for Killer Shark, nothing more.

http://www.armchairarcade.com/aamain/print.php?article.103 – A History of the early years of Atari has information on Shark Jaws