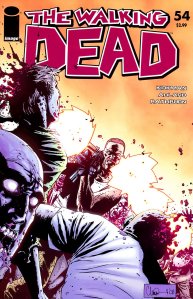 The cover of Issue 54 promises ‘All out action!’ and that was also the solicitation byline that accompanied issue 54. The only thing is, what you see on the cover is not what you see in the book – not that that matters, because there is plenty of action as The Walking Dead takes a whole new direction…..

First off, let me say that 2 of the 3 new characters are already getting plenty of focus in their initial appearances in this title. Let me also state that one of them, Sgt Abraham Ford, is looking likely to emerge as the leader of this newly formed collective. He has courage, a soldiers killer instinct and capability and he has a moe human side. There are a few hints of a backstory (he had a wife and kids, he has suffered as much as anyone) and despite his brashness (and his cutting sense of humour, which raised a few smiles)he has a heart. He needs to get his companion Dr Eugene Porter to Washington DC as (he claims) he has the knowledge to help stop the advance of the undead. It seems as if the cause of the outbreak was down to the Military ‘weaponizing’ the advances in science and medicine, and the result was the cataclysmic end of most life on Earth.

As for the cast of regulars, they seem mistrusting of the new arrivals but are eventually persuaded to go on the road with the Doctor, Sgt Ford and Rosita (of whom we know little yet). There is still time for little cameos from Maggie and Glenn, Dale and Rick, Rick and Carl and, most interesting of all, Michonne and Rick. I dont know why, but I get the feeling that after their mutual secret swapping previously, a little more intimacy could be developing in their relationship.

Oh, there is action, and it is great – but no guns. Oh no. That would bring a herd down upon you, and a herd is what you most definately want to avoid. Listen to Sgt Ford – he is the new voice of authority. 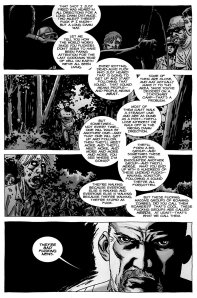 The quality of this title remains incredibly high – the story is moving in an exciting new direction, the new characters (especially Sgt Ford) are worthy additions and the established faces all get some space in this issue too. The art from Charlie Adlard is, as ever, perfect for this title. I could imagine no-one else rendering this vision ofhope and despair so well.

That cover was a bit misleading though. But when the stuff inside the covers is as good as this, I think we can allow a little artisitic licence (and marketing) to pass us by.

As in previous posts here and here, I like to gather up a few of the Walking Dead solicitations and have a look at their spoiler-ific covers. Here is the next batch – numbers 53, 54 and 55, which purportedly take us up to September, but as anyone who gets TWD on a monthly basis knows, this is a very loose time frame and a September solicitation could well be a January 2009 release. 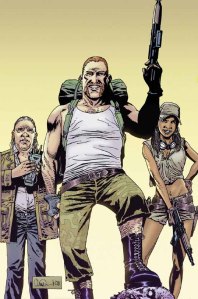 A bold statement of intent, a new beginning? Rick Grimes has now been absent from every cover since his appearance on #49, when he was being led by a determined looking Carl. Is this the start of a whole new perspective on a Zombie ravaged world? Does this cover herald the new order? Are we looking at the new major characters?

So many questions, like – are they meeting up with Rick? Carl? Michonne? Are they the Military? Are we about to see the beginning of the fightback against the undead???? The cover art suggests that there are well organised, fully resourced communities out there beyond the limited territory that has been well covered for the last 49 issues. The central character in particular looks a very capable individual, posed like a big game hunter, a decapitated Zombie head under his heel (another graphical signature that states the Zombies are going to be crushed??). 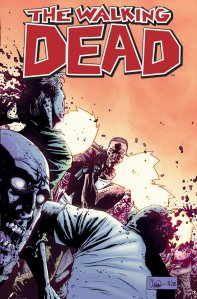 If cover #53 could be likened to an appetiser, then this is the main course – as the solicitation states ‘all out action!’. What else is there to say? Some fantastic kinetic artwork from Charlie Adlard, with the big guy from #53 in full John Woo mode. The revenants are just being shredded in the wake of his fury. The zombie at the forefront looks suitably distressed, even though we have to assume they lack ’emotion’. Even though the big guy is surrounded, you have to assume there is little peril he faces. This is one capable individual. 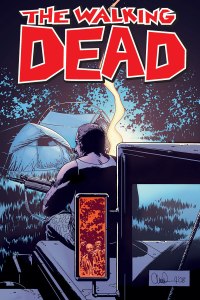 A more reflective cover (in more ways than one – check out the side mirror on that Jeep!), but with danger lurking. The big guy is still around! The fact they seem to be in open country, with a collection of tents and someone on watch suggests that we are not focusing on any sort of walled community or military compound. Maybe we are going to be focusing on another bunch of ordinary folk in extraordinary circumstances, constantly on the move, looking for food and shelter.

The zombies that the reader can see in the side mirror of the Jeep is a nice touch, especially as the background colouring is red, as in RED for DANGER!!!

Oh, and still no sign of Rick Grimes. Is this a tease? What gives?

With issue 50 finally due to ship next week (July 2nd), and calculating releases on a one per calender month basis, we can expect to see #55 in December at the earliest, and maybe not until 2009 is any other releases slip. This is one of the most tantalising and frustrating things about hunting for future covers, you have a glimpse of a story, but no real idea what is going on. In the meantime, let the speculation run free!