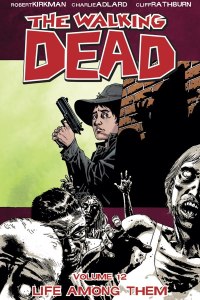 I recently discussed the merit of TPB over single issues, in respect of reading The Walking Dead. I (think) I came to the conclusion that trade is best. But TPB 12 ‘Life Among Them’ has set my view in concrete. I think that this trade, more than any before it, glues a bunch of single issues into a thoroughly immersive whole.

The main engine of this arc is – Rick Grime & Co. find a new sanctuary. Beyond that, we get a Eugene moment, a nice flashback of Michonne’s adventures with her Katana, and Charlie Adlards art reaching new levels of density and sophistication. I say this after reading a few pages of volume 3, and seeing how far the scratchy detail back then has bloomed into a dark, voluptuous realism. Oh, we also get a KICK-ASS (I say this in the spirit it is intended, free of irony) action segment roughly halfway through the book, which made for a truly great single issue, but is just as much of a treat slotted amongst the more typical human drama that Kirkman has made the focus of this title. And Douglas produces a terrifying, heartfelt monologue on mans inhumanity to its offspring. It is powerful stuff, and maybe only the sort of thing that would come from a father of a young child. Kirkman nails it with that speech. I found myself nodding in agreement while not wanting to read on, but being compelled to. In amongst the thousands of words that Kirkman produces for this title, that speech by Douglas stands out as a masterclass in how to write relevant, raw, emotional comic book.

Although I read the singles, reading this most recent TPB has led me to revise my opinion on several Walking Dead matters;

4) Abraham is probably the man most likely to take centre stage now. The guy has presence, leadership skills, respect and brute force if all else fails. He is as human and vulnerable as any of other main characters, but takes up a lot less dialogue balloons to get his point across to them and us. Know what I’m sayin’?

But as entertaining and compelling the book is, I detect a certain amount of verboseness creeping into the title. I am not saying it is all bad – Kirkman tends to drive the narrative of this title with a lot more words than action lately, and the quality has not really suffered because of it – but the problem with a lot of words is that you only need a few to FAIL to really stick in your mind. And I am thinking here of a scene with Andrea and Rick and she says something at the end of a big discussion, something like;

Those sorts of generic soap opera / drama one-liners really stick in my throat. This TPB loses 1.5 points out of 10 just for that sort of generic tripe. But minor grumbles aside, this is an assured and gripping instalment in the franchise. So if I did give scores in reviews, it would get an 8.5 out of 10.