After several years defining ‘development hell’, and making the title of the game more a statement of intent (which was accident rather than design, one assumes), Ubisoft look like they are finally close to getting their post-apocalypse survival game out in the next few months. It’s planned for this winter. It’ll be out via Xbox live & PSN, and from the reports coming in, it is looking like it could be quite special, a mix of ‘Assasins Creed’ and ‘Uncharted’ with a bit of ‘The Road’, with it’s atmosphere of desperation, thrown in for good measure. More here;

Just to show how long this has been in development, this is from the E3 in 2008 (with a completely different main character);

and they even managed a E3 2010 video (which again, looks nothing like the ‘I Am Alive’ that is ready to go live);

8 page preview of part 1 of the 6-part “Over the Hill with the Swords of a Thousand Men.” 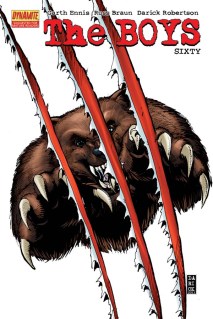 
“The Walking Dead” announcements include the new story arc “A Larger World” where our favorite survivors are going to encounter many more survivors. Kirkman also told us that the story is intended to go for “years and years and years” and still “feels like he’s just getting started” and has some vague ideas about how the story will end.

“The Walking Dead” closed out the announcement and teaser slate, beginning with shot of a forlorn Andrea holding Dale’s hat. (“Andrea, still upset over Dale,” said Kirkman. “What are you gonna do?”) The newest storyline in “The Walking Dead,” “A Larger World,” deals with the survivors attempting to creating a new civilization in the zombie-filled world. “This is something we’ve been working toward in the book since the very beginning — how do you establish civilization?” said Kirkman. “Now, it’s gotten to the point where it’s actually getting kind of real. They’re going to find other communities and start interacting with them. It’s going to be a really cool evolution for the book.” 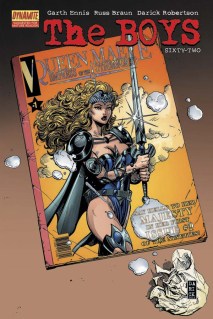 Well, that’s a true first for a comic book cover as far as I know, a post-masturbation scene, with a Queen Maeve magazine image as the catalyst for the (ahem) ‘act’.

If anyone was ever going to provide the comic book world with such a front cover, one of my top choices to provide it would be Garth Ennis. Bless him. He has delivered.

The Boys #62 will be out in January, courtesy of Dynamite.

Friends – ‘I’m His Girl’ – there is something about this song – gets its hooks in you after a couple of plays.

They are at the ‘London Calling’ festival in Amsterdam in a couple of weeks, along with Hard-Fi and The Rapture (dutch site but there is an English option in the top right corner);

The finest mail-out i get in my inbox every week – the way Joe Gordon enthuses about Graphic Novels really whets the appetite. The site as a whole is splendid, as is the blog, but the newsletter is a thing of beauty and something I look forward to every Wednesday.

and then look down the right hand side of the page, and look for the ‘Subscribe’ tab (see below)

Well worth your time. Be prepared to want to spend money.

those we left behind