Italia 90 – a great World Cup if you were English (well, up til the end of the Semi Final). Probably released to cash in on the Greatest Football Tournament on Earth, ‘Football Champ’ was Taito’s quirky and immensely playable Football arcade game. The Greatest Football Arcade Game on Earth. according to me.

This was another Summer ’90 / ’91 Drayton Manor Arcade experience, and this one was jostling with Operation Wolf & Final Fight for my meagre earnings (believe it or not, but students working part time seasonal jobs at Theme Parks are not paid huge amounts of money. FACT.) 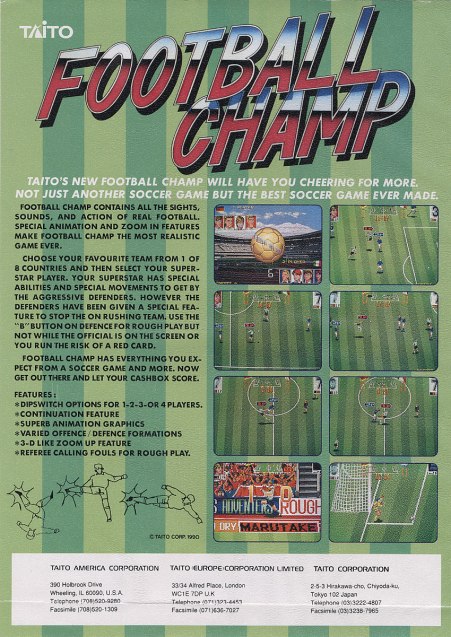 There was a luxury version of this game, with a little bench, and a huge (well, 40 inches or so) screen positioned roughly 2 or 3 metres away from you. If memory serves correct. And it doesn’t always.

The football was based around an International Competition (ie The World Cup in all but name). You could play as most of the major teams (including England), and matches lasted around 2 minutes. Control was fairly   basic – it was short pass / long pass / shoot at goal. But there was the added joy of violence when you were not on the ball. Yes, you could pile in with a vicious slide tackle, you could attempt a Harald Schumacher type foul where you lead with your knee, or you could just punch the opposition in the face; 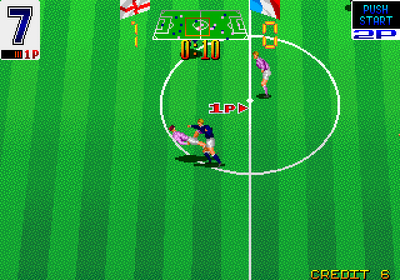 if you got caught by the referee, you could get a yellow or red. The idea was to floor him from behind first, then go on your merry way, crippling the opponents. It just wasn’t sporting. But it was funny.

The action was fast, frenetic, and there were sweet spots on the pitch that, if you timed it right, you could lob the ball over the goalie as he grasps at thin air. Getting the time and space to perform this move was not always possible though, as opponents always seemed to be harrying and hassling, which made the goals,when they did go in, even sweeter.

Playing it laughs, Taito appear to have gone for comedy and caricature for their characters in the game. Check out those curtains (ie the haircut) on the Dutch Manager (he looks a bit like Steve Buscemi);

It was a wonderful, fun game. Loads of re-playability. And the reward for winning the Tournament was the magnificent “All your base are belong to us’ lite;

and you can play it on MAME. You should try it.

If you want the definitive account of Football Champ, then I would like to direct you to this fantastic piece;
http://retrovania-vgjunk.blogspot.co.uk/2012/06/football-champ-arcade.html
there is a little bit about ‘Super Shots’, something I never heard of before. They even have some footage on youtube of someone doing these hallowed moves, for goodness sake.

‘You Are Hero’ and various other screenshots are courtesy of
http://vgjunk.tumblr.com/post/25866957714/its-always-nice-to-get-some-recognition-from
and
http://retrovania-vgjunk.blogspot.co.uk/2012/06/football-champ-arcade.html

The Football Champ flyer is courtesy of;
http://flyers.arcade-museum.com/?page=flyer&db=videodb&id=2365&image=2

A game that got me back in the arcade. Back in 1987 I was working at a theme park (Drayton Manor) that had an arcade bang in the centre of the park, and after all the rides shut down, the canny Arcade operator used to keep his establishment open for 30 minutes or more, to mop up any pennies not already spent by punters. And invariably, one or two of the staff would wonder in to either blow their meagre earnings (this was pre-minimum wage and a lot of us were Sixth formers or college / University students who would take whatever pay we could get). Some would go to the shove penny contraptions or the fruit machines, but I only had eyes for the video games. When Operation Wolf arrived in the summer of 1987, I was only interested in standing at that cabinet, cradling the fixed swivel mounted light gun, that looked like an Uzi, and attempting to free the hostages from the 6 stages of concentration camp war madness. 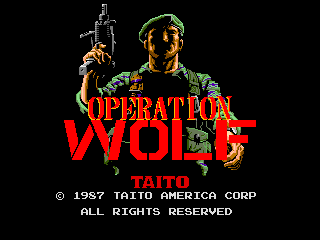 So many great elements in this game; the way the gun gives force feedback to simulate recoil each time you fired the gun, the relentless barrage of enemy hostility, the constant search for ammunition as your depleted stocks begin to become a threat to your mission. The little static cut scenes that move the story on with economy and purpose. The Arnold Schwarzenegger / Dolph Lundgren super-soldiers. 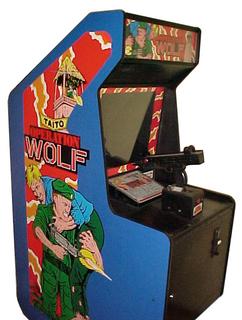 The graphics, for their time, were fluid and exciting. The controls on the gun were responsive and the on rails gaming experience immersive. And that cabinet looks marvelous doesn’t it?

When you eventually completed a level, it was with a real sense of achievement, such was the well pitched difficulty setting.

Death was a common experience in the game. I do not know how much money I put in that machine at Drayton Manor, but for every 10 minutes of Operation Wolf, I probably had to work a couple of hours to afford to play it. But that was okay. Operation Wolf was a classic arcade game that made the light gun / on-rails game relevant and exciting. Even 25 years later, its a perfectly playable game. You can see for yourself as you can play it online. You just don’t get the light gun experience.

Even the home conversions were good (and there were plenty of them, including a good CPC464 version, a C64 version and a top notch Amiga conversion. It also spawned 3 sequels, one of which, Operation Thunderbolt (1988) nearly cost me as much in 50p pieces as its predecessor.