The first series of Crossed finishes this week. I say series – it was due to last for one nine issue run, but Avatar have decided that this uplifting tale of Brotherhood, Solidarity, the Milk of Human Kindness and World Peace* has legs, and like the lucky / unlucky few of the non-Crossed throughout the series, it can run. But I digress. This is merely to point out while looking through some New English Library paperback covers, I came across the origin of Garth Ennis’ warped and terrifying creations! Look! 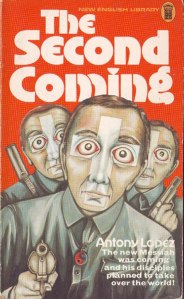 They both have their ‘qualities’, shall we say. I think the Crossed win the scary competition just because I know they are bloody relentless, despicably cruel and vilely inventive in their tortures and evil. And they have amongst their racks, one called horsecock. He has that name for a reason other than you may think. It is because he uses a horse cock as a bludgeon. Those proto-crossed also have something of the night about them, and something of the zealot.

Anyway, looking forward to the finale to Crossed ‘Season 1’. And if you are wondering what Garth Ennis makes of all of this sequel stuff, you may find an answer (diplomatic? truthful?) here;

*Again, when it comes to Crossed, I take the piss. Crossed is anything but uplifitng.