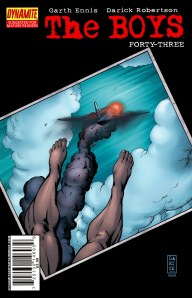 As an end to ‘The Innocents’, the end was satisfying enough, as we, as readers, had already got the message that these ‘supes’ were, in the main, simple and artless – big kids. Hughie and Malchemical get to face-off, but the final blow is dealt by someone else, in a manner that is funny but not neccesarily what I wanted to see. To be honest I wanted Hughie to finish off Malchemical but there are limits to what our little hero can do, and that particular super-bastard (Malchemical really gets to twirl his moustache and chew the scenery in this issue) is too much for him.

So, good-bye SuperDuper, and not before time – they had out-stayed their welcome by at least an issue. What ‘The Innocents’ was all about in the grand scheme of things, is more important. This arc has established fractures in ‘The Boys’ (no spoilers on that one – just read it) and a growing atmosphere of tension and conflict. We also seem closer to an all-out war with Vought American, and The Seven. The final panels suggest that Annie & Hughie, much as in ‘The Innocents’, are the plot device that will escalate any potential conflict between Vought American / The Seven and The Boys. Well, bring it on, because Ennis is putting all the pieces in place for an apocalyptic scrap. I don’t think he will disappoint either, because he rarely does that. And Darick Robertson contributes his usual high quality art, really emphasising the tension and violence throughout the issue.

Great issue – not so much for the Superduper story, but for what this arc represents in the wider narrative.