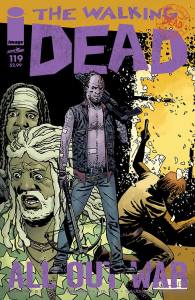 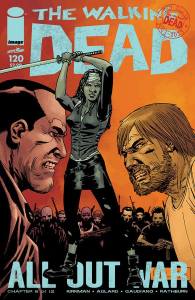 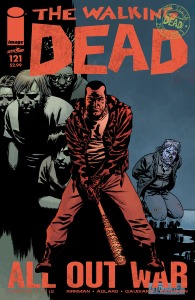 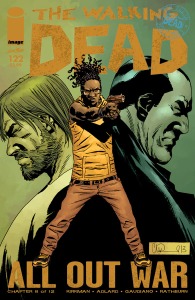 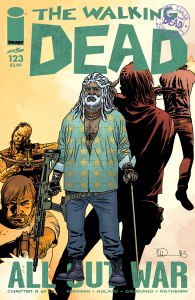 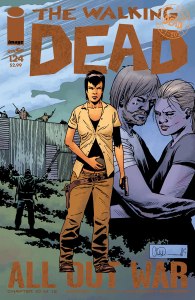 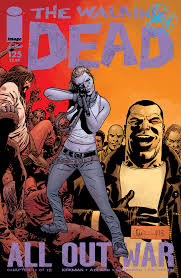 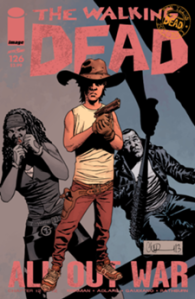 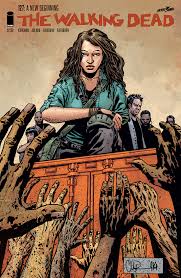 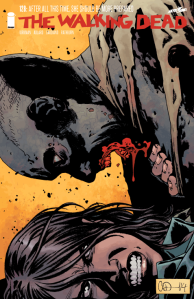 The first half of the year for the ongoing comic book series The Walking Dead was full of noise and drama…..and a story progression that no-one could have probably imagined. In hindsight, I believe that the point of ‘All-Out War’ was to get Kirkman to a point where he could launch issue 127 – ‘A New Beginning’ – on his readership. A clearing of the decks, if you like, and a whole new jumping-on point. It was brave, and was, to an extent, divisive amongst the readership. But before we get to the surprises in issue 127, let’s first of all deal with ‘All-Out War’….

Though I was never a fan of this 12 issue arc, the introduction of Negan and the Saviors (way back in issue 99, in the late Spring of 2012) certainly gave the series a new focus and, in Negan, produced a Villain larger than life (physically and in personality) and whose deeds were never purely evil. There was method to his madness, and a real purpose to his existence in this post-apocalypse. That being said, the inevitable confrontation between Rick and his allies against Negan and the Saviors promised much but only intermittently sparked into life. The ‘All-Out War’ the arc promised was not much more than a series of skirmishes and a final dust-up between Rick and Negan.

So the war-that-wasn’t didn’t live up to the hype, but there was still some great moments to be enjoyed, such as the is-he/isn’t-he-on-Ricks-side activities of Dwight and the reveal that Jesus was gay (Jesus aka Paul Monroe just in case you were wondering – the other Jesus may have been too much of a revelation in a regular comicbook). Also worthy of mention was early on in the ‘war’ Negan’s use of Holly as a weapon was most inspired and a highlight in his attempts to destroy Rick.

Though the majority of the first half of the years Walking Dead releases concerned the battle between Rick and Negan, there was enough time to kick-off a whole new chapter of the series. Issue 127 heralded a new era, with a new logo straddling the top of the page, with the previously larger lettered ‘Dead’ of the title now being the same size as the rest. But it was much more than a logo change that makes this issue significant.

A jump into the future, roughly 2 years after the events of ‘All-Out War’, heralds ‘The New Beginning’, with the communities of Hilltop, Alexandria (and presumably) The Kingdom enjoying a period of stability, security and peace. The question of what happened to Negan is quickly answered (he is the main resident in the cell(s) at Alexandria) and we are introduced to a new group of survivors, of which, a girl called Magna appears to be the leader.

What the new situation allows is a short-cut to see how established main characters have developed and grown. Rick is now less able-bodied following his battle with Negan, but is more of an established and revered leader – a true statesman. Carl is a teenager bursting with life and needing to cut loose from his Fathers protection and seek a new life for his self. These changes seem organic and not jarring. A risk for the creative team certainly, but one that appears to be paying off.

A jumping-on point for new readers, a brave new direction from Kirkman, a new perspective on established characters, a new society to explore…see how this new beginning unfolds in Part 2 of The Walking Dead 2014 review, coming soon…