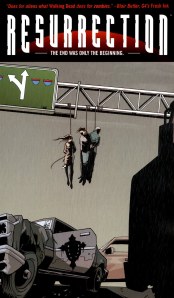 “Does for Aliens what Walking Dead does for Zombies” (Blair Butler, G4’s Fresh Ink)

which is quite a bold statement. I tend not to agree with this – though Resurrection has its moments, it simply does not have the quality and consistency of Kirkman & Adlards post-apocalyptic epic. That is more in evidence in the current installment, where, despite plenty of action, it all feels a bit flat. The ‘end of chapter one’ of ‘book two’, is certainly not without incident, but it all feels a bit daft really. Our protagonists encounter a new bunch of survivors, who all wear hooded cloaks. Whatever could that signify? I would give you one guess and you probably would be correct. Yes, our survivors have encountered religious zealots, and we are whisked away to a pristine community (in Baltimore, apparently) – where all the buildings and surrounding area are intact (there is some symmetry here with the latest installment (#69) of The Walking Dead). For example, one of ‘The Righteous’, a follower of ‘The Acolyte’, reacts too strongly when one of the survivors mentions ‘bugs’ in the same sentence as ‘the enlightened’. The big reveal of who (or what) ‘The Acolyte’ is at the end, and it is somewhat predictable, but it is executed well enough.

I think the problem with the issue is that it is a lot of people arguing and plotting against each other, and then we meet some people in hoods – and their ‘god’. And a lot of it (specifically, the bickering) is not all that interesting. This issue is a bit of a drop in quality compared to the last few issues. Felt like a bit of a chore reading it. The dialogue is very clipped, monotonous at times, and the cartoon-like art becomes a problem again – probably because of the lack of action etc is not diverting my attention from the illustrations. There is also a mistake in the lettering on page 17 when a characters dialogue is incomplete (the speech ends with ‘the .’).

Let’s hope that this title gets back on track for the start of Chapter Two.

One highlight – a fantastic cover which is the best of the series yet. Don’t see how it relates at all to the contents inside, but it is a stunning image nevertheless.