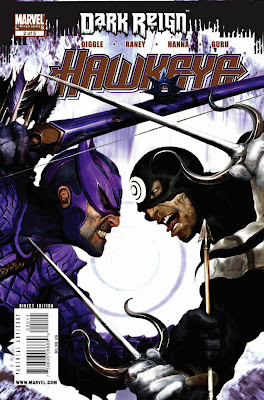 Steve Diggle has come up with the goods here. Norman Osborn recruits the psychotic hitman Bullseye to be Hawkeye in Osborn’s version of the Avengers (aka Dark Avengers). Mayhem and murder ensues, with Bullseye indiscriminately killing civilians, and finding more perverse ways of doing it as he goes along, and Osborn putting his quasi-paramilitary organisation H.A.M.M.E.R to good use by suppressing any news organisation that tries to publish footage of the carnage. Osborn knows that ‘Hawkeye’ is a potential liability. With a neat section that reveals Osborn to be able to trade in the bland platitudes of corporate management speak, a trap is set for ‘Hawkeye’.

This title is a difficult one as I am not sure who or what Marvel expect the reader to identify with. Maybe the real focus will be Ben Urich and his determination as a journalist to expose the rotten core of the Osborn administration and his dictatorial grip over the Marvel Universe version of America. He only plays a small part in this issue, but the mysterious voice who calls him and urges him on in his crusade suggests that his role in ‘Dark Reign Hawkeye’ will only increase.

As another take on the ‘Dark Reign’, ‘Hawkeye’ is a solid performer, entertaining while giving the wider picture on Osborn’s activities, while showing that Bullseye is one sick individual. I like the way Diggle paces the plot, the dialogue is great, and the art, by Tom Raney, is clean and bold and he really captures action well – especially when there are explosions involved. Perfect mini-series material, this compact tale of coruption and psychosis should sustain its momentum for its limited run.