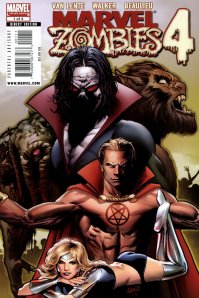 After reviving the Marvel Zombies franchise with its third iteration, starring Jocasta and (the superb) Machine Man, and just months after its finale, dynamic duo Fred Van Lente and Kev Walker have brought the first issue of the fourth installment of Marvel Zombies. I am glad to say it continues their good run of form. Marvel Zombies 4 is a lot of fun.

The idea of a supernatural super-team is nothing new, but in this context, having ‘The Midnight Sons’ chasing down the undead works perfectly as a concept, even though this first issue is really just re-establishing characters such as Morbius and Jack Russel (aka Werewolf by Night). There is plenty of humour streaked throughout these pages, whether it be Jennifer Kale poking fun at the Son Of Satan (aka Daemon Hellstrom) and his demonic laugh, or the fun to be had with a zombie Deadpool who is now nothing more than a head. Yes, a zombie Deadpool who is nothing more than a head. The beauty of this is, that teamed up with Zombie Simon Garth, Deadpool steals all the scenes he is, with some absurd situations working brilliantly thanks to the humour in Van Lentes writing and Kev Walkers great and gory art. There are even some undead in there, but not what you would expect at all. There is some darkness and a lot of blood and violence, with Morbius especially full of rage after his experiences in Marvel Zombies 3 (but this rage is what is propelling MZ4), but it is tempered by the lighter moments when Deadpool brings some excellent comic relief.

A great start – I think this is going to be one of Marvels strongest titles during its short run. Who would bet against there being a Marvel Zombies 5?